The so-called corpse flower (Amorphophallus titanum) is like the “panda of the plant world,” according to Devin Dotson, public affairs specialist at the United States Botanic Garden (USBG). While this titan arum may not be cuddly and plushie-ready like the panda, it has got the kind of charisma that gets people excited about the mysteries contained in botanical collections: live broadcasts of the monumental fetid blooms in action are like the Fat Bear Week of plant conservation.

It’s for these reasons, and many more, that this outsized aroid is the focus of a new cutting-edge conservation effort among botanical gardens: USBG, Chicago Botanic Garden, BGCI, and various other groups have been working hard at beefing up strategies to increase the health of the world’s population of this spectacular flower.

A. titanum — hailing from the Indonesian island of Sumatra — is of course well-known for the stench it produces when it blooms, and the fact that it blooms monumentally, rarely, and unpredictably. When titan arums decide the conditions are right, they rapidly reveal the largest unbranched inflorescence in the world. It’s an event that — in normal times — draws big crowds to the botanic gardens they call home, and even more onlookers online and in the news. 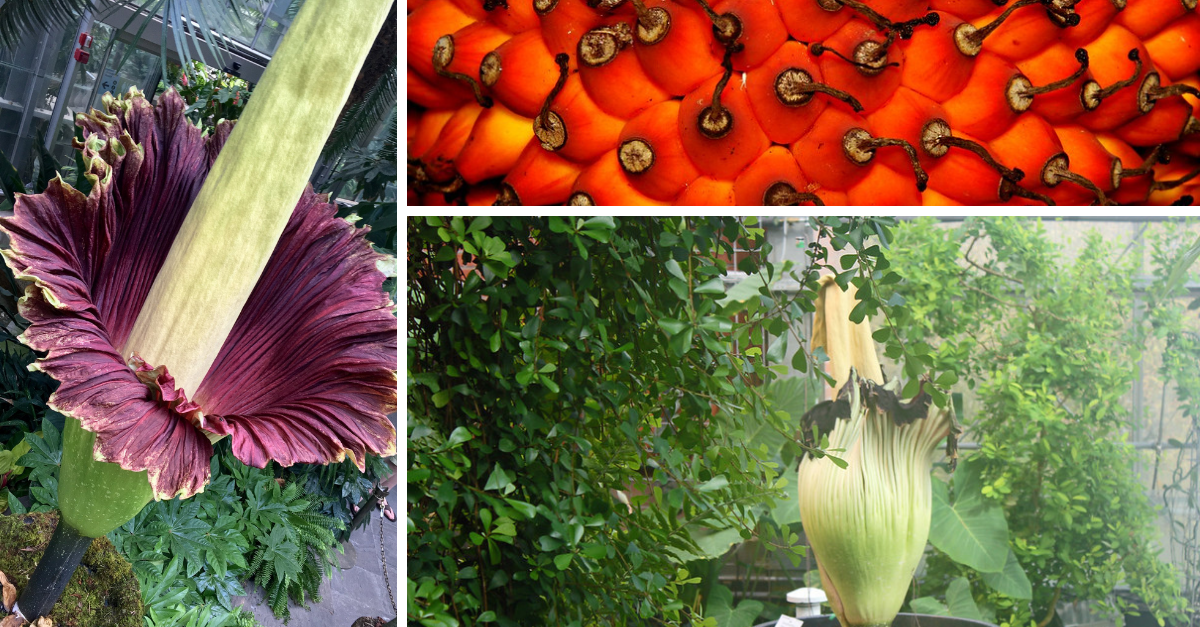 Many plants in botanic gardens have their origins in private collections, where genetic diversity has historically been limited.

The partnership between gardens will see the genetics of corpse flowers in participating collections tested at the Chicago Botanic Garden, creating a database of the diversity available (much like a zoo studbook or animal pedigree). It’s a far cry from the days of express-mailing pollen when flowers in different collections happened to have overlapping blossoms. With each blooming event, pollen is frozen and stored for a program of smart plant breeding that aims to maximize the diversity of genetics in the ex situ population.

This year, the USBG had two of its flowers bloom for the first time — one aged four, and the other aged eight. The organization has around fourteen adult corpse flowers, and around forty younger plants. This may seem like a large number — especially considering how popular the plants have become in many botanic gardens — but, in the wild, they are ailing. Human activity is rapidly encroaching into the natural habitat of the titan arum, pushing it onto the IUCN’s Red List. There are now fewer than 1,000 known specimens in the wild, Dotson said. The USBG plans to distribute some of the young plants created in 2017 to other botanic gardens and universities for conservation and study.

“Botanic gardens have been cognizant for a long time that our care and stewardship of plants can conserve them in ex situ conservation.”

Right now, the project is still just getting started, and the participants hope that more gardens or other partners will come onboard.

The program also highlights the importance of partnerships when it comes to conservation. BGCI, in partnership with the USBG, brought together staff members from 30 major botanic gardens in the U.S. for a two-day workshop in 2018, hosted at The Huntington Botanical Gardens in San Marino, California. The focus of the workshop was ex situ plant conservation status and strategies for the Araceae family. It was at this conference that Chicago Botanic Garden announced their idea for this genetics-based conservation breeding program for A. titanum.

It’s not currently known what gives rise to the inflorescence event in the titan arum: some alchemy of age, corm size, heat, humidity, and light provokes the carrion-tempting display. The mysteries of getting this plant to reproduce — of course — make the panda analogy all the more apt. The USBG is also working to gather more general data about A. titanum, as many aspects of the plant are still not totally understood. The findings have great potential to help inform conservation efforts more broadly.

“The more we know about it, the more we can help it,” Dotson said.

You can support our plant conservation efforts by sponsoring membership for small botanic gardens, contributing to the Global Botanic Garden Fund, and more!